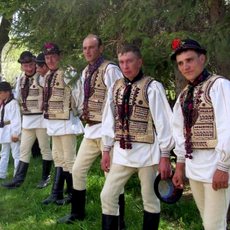 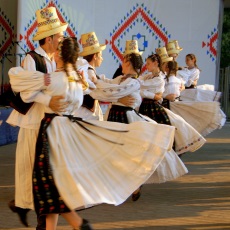 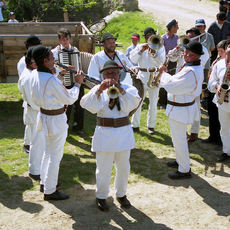 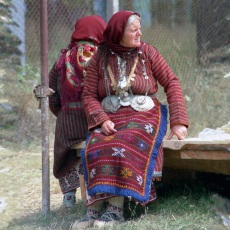 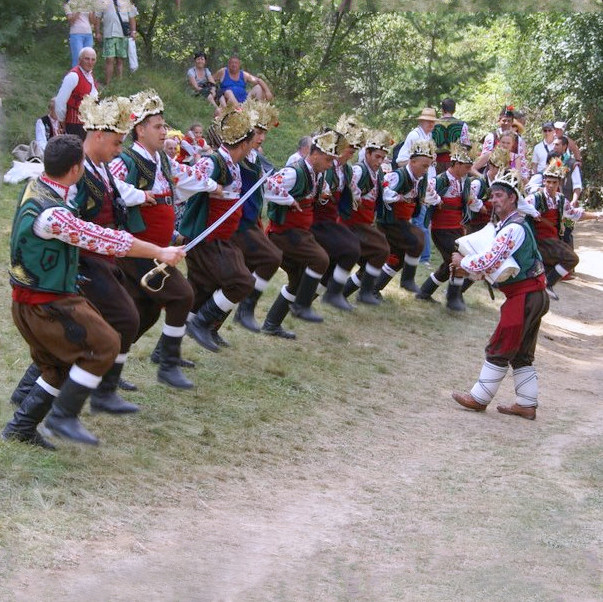 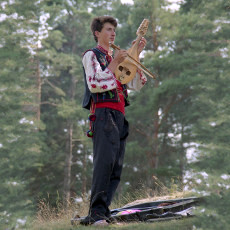 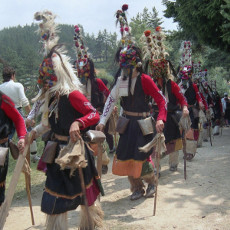 The name ‘Eliznik was based on an amalgamation of the authors’ names which they had previously used for dance teaching booklets and notes. This website has two parts: the reference ‘fixed pages’ and the newer Blog. These are interlinked through the context dependent menus on the left sidebar, so posts will have links to related reference pages, and references pages will have links to posts. This Blog is divided into three subject areas: Ethnography – our continued research and interest in the customs, music and dancing in the Balkans Academic – subjects from the perspective of academic study Photos – the latest uploads History The …read more

﻿The term Arnăuți is derived from the mainly Albanian mercenaries of the 18th to 19th centuries when the Phanariot rulers of Wallachia and Moldova formed army corps. The Romanian term Arnăuț comes via Turkish from the Greek “arvanites” for the Albanian population in Greece. In time, the term Arnăuți came to refer to the occupation as a mercenary rather than an ethnicity. After the fall of the Phanariot regime in 1822, these army corps formed by Arnăuți were disbanded, but they remained in the cities as armed servants of boyars or foreign officials. The Arnăuți as part of the New …read more 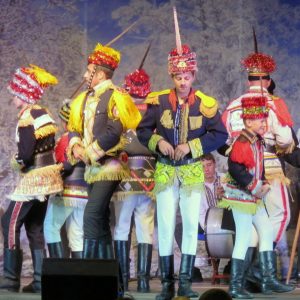 The Irozii tradition is a group of boys (ceată) who go house-to-house at New Year. In Suceava county, west of the Suceava river and predominantly before the mountain zone, these groups of Irozii typically perform the men’s group dance Pădurețul, sometimes followed by Trilișești or the chain dance Arcanul.

The name Bumbierii or Bungherii comes from the belts which have hundreds of brass buttons (in Romanian bumbi, or the popular term bunghi) and are wrapped three or four times around the body, around the waist and diagonally over the shoulders. The costumes imitate (are a parody of) those of the Austrian generals during the Habsburg period with spectacular tinsel ornaments, strings, fringes, belts worn diagonally with bells, beads, sequins and brass buttons. 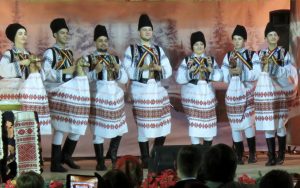 ﻿Centred in Botoșani county (stretching south into Iași, Neamț and Bacău counties and north into Herța (now in Ukraine) the most widespread zoomorphic tradition is Calul (horse) in the form of the Caiuți (little horses). Lavric says the horse was seen as representing fertility in the Carpatho-Danube area, but now the Moldavian Caiuți, as a ritual masked character, has become largely a dance for entertainment. In most localities Calul, Căluțul or Caiuți are not accompanied by another zoomorphic masked character. The entourage of Căiuți generally includes other characters; ladies, knights, old men, officers, emperors, ladies, outlaws, Turks, bridegrooms, doctors, clerks, …read more 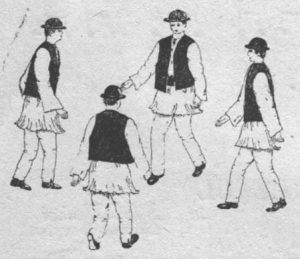 Around the Carpathians the men’s group dances that fall in the category known as Ceată distractivă (for fun) includes the dances Războiul (or Resteul) (Mărginimea Sibiului and Țara Oltului), Vulpea (Muscel) and Gătejul (upper Mureș). Bucșan inferred that the distribution of these dances is connected to the shepherds however it should be noted that Gătejul is not of the same choreographic form. This page is about Războiul from the southern Transylvanian region, but it should be noted that the title Războiul as a ‘fun’ dance is known in other parts of Romania as a subtype of Sârba. In the zone …read more

The dance repertoire of the shepherding communities along the Carpathians is thought to be an older layer of tradition that interconnects the men’s dances of northern Moldavia through eastern Transylvania to the men’s dances of Mărginimea Sibiului in southern Transylvania. Shepherd’s dances are (mostly) men’s dances and are either in “ceată” formation (dancers are unconnected to each other, and dance in unison, in a circle), or as a chain dance in “shoulder hold” (Brâul, Sârba). Although the shepherds do not form a society that might be termed ceată, they dance is in the same formation as in ceată dance in …read more

﻿The common format of these dances is the ceată formation of men in a circle, unconnected and dancing in unison. Generally the first figure is based on a fast walk in single file around the circle, followed by some combinations of stamps, heel clicks or jumps. The other men’s dances in the local repertoire are chain dances, such as Arcanul. These dances are performed within the local New Year customs (Irozii, Jieni, Bumbierii) and local social repertoire. Some variants are performed by both men and women. Giurchescu lists the “North Moldavian corps” men’s group dances as Trilișești, Ardelenescul, Leușteanca, Țânțăroiul, …read more 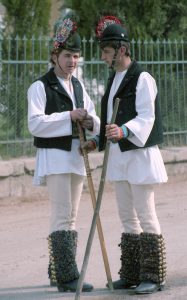 The ‘classic’ Romanian ethnologist classification of group dances is based on differentiation by current function and region, where the regional forms are generally significantly.

Dances that have retained a custom or ritual function (Căluș, Călușeri, Căiuți, Irozi). I previously classified these as “ritual stick dances”, but not all retain a stick, and most now have a function within a “custom”.

Carpathian men’s dances, sometimes termed as Carpathian springing dances, are from the social repertoire, but are danced in Ceată formation without sticks or other props. This includes the regions along the Carpathian mountains; Oaș, Maramureș, Bucovina, east Transylvania and southern Transylvania.

Transylvanian lad’s dances is a genre shared between the Hungarian and Romanian communities. This genre can appear clearly defined in region and form, but hides a complex background that led to the genesis of the genre. From the Romanian perspective the genre might be termed Feciorește (lads’ dances). The older layer of such dances is seen in Ceată dances linked to the Carpathian Ceată dances, however this merges with the dances that have complex figures of leg and boot slaps, the Romanian Ponturi and Hungarian Legényes, that can be performed in a solo competitive context. 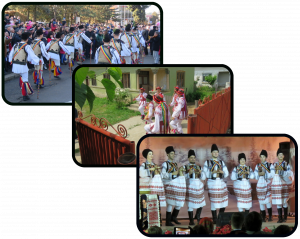 Ceată men’s group dances Customs and rituals Danubian Căluș Călușari in Bulgaria Transylvanian Călușeri De bâtă stick dances Moldavian New Year Căiuți and Calul Bucovina Irozi Bumbierii Moldavian Arnăuții The term Ceată Ceată in Romanian refers to a group that gathers for a common purpose. The same word is used in southern Slavic, чете, and also in Turkish, çete. Bucsan argues that ceată could equally have derived directly from Latin, coetus, which has the same meaning of a group. Societies of men that traditionally form to perform carols and other customs are known as Ceată, but also Jienii or Junii meaning …read more

The social dances in the villages of the Banat plain were, in past times, mostly couple dances. The Bartók music collections dating between 1912 and 1913 included some dance music, and certain dances were notated by Marcu in the 1960s, but now dancing knowledge for these older dances remains transmitted only within the dance groups and ensembles. 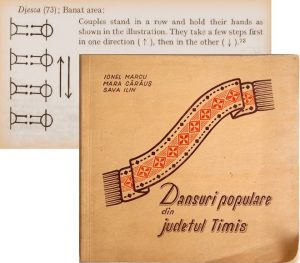 See our web page on Banat plain column dances – Duba, Lența, Desca etc. for a discussion on dance form in relation to the other Banat couple dances.   Marcu discusses the dancing at Sunday dances on the Banat plain in past times when three to five dances were played cyclically, one after the other as a suite, for example: Sorocul – followed by a selection from the following: Duba, Bradu, Desca, Lența, Judecata – Hora. Giurchescu lists under her “Type 1 slow Ardeleana” a list of Banat Ardelene plus dances Lența, Șireghea, Duba, Bradul, Desca, Măzărichea. Marcu puts the …read more

Couple dances Ardeleana Slow Ardeleana Ardeleana Banat Banat plain column dances Duba,Lența, Sireghea etc. Polca Bihor For a full discussion on the documented sources see our blog Banat plain column dances. The commonality connecting these various different dances is the dancing formation of a column of couples, with partners facing each other and holding their partners hands. Typically the dancers move side-ways right and left in a bilaterally step pattern. Giurchescu’s classification “categories” Giurchescu’s classification separating the Ardelene into sub-categories of “slow”, “syncopated” and “fast” is a useful basis . However, these sub-categories are represented by different unrelated dances in …read more 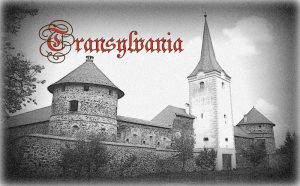 Just for fun a couple of decades ago I took the archaeology maps from “History of Transylvania” and overlaid the Romanian ethnographic regions (the celebrated areas with old layers of Romanian folklore) on to the maps of archaeology sites for the various waves of invaders. The history of Transylvania is particularly illusive, even though Transylvania was on the trade route from the Black Sea to Western Europe. There is a continuing (can never be proven) debate regarding the arrival of the Latin speaking Romanians; are they Romanised Dacians, or other Romanised peoples that moved there later, and if so, before …read more

The notable feature of many couple dances in western Romania is the ‘column’ formation, and this is the basis of Giurchescu’s “Ardeleana type” category, where the most distinguishing characteristic is that partners face each other and are arranged in a very compact double column. When this is a community dance with very many couples, such as Ardeleana in the Banat mountain region, the formation is an open circle forming a “horse-shoe” in the dance space, a formation that is common for central European dances. The dancers face and their partner hold and are arranged with the men facing into the dance space and the women facing out. When there are fewer couples, or there are several smaller groups of dancers, the formation becomes a straight column of dancers.

The Arpad (Magyar leader) conquest of this region was probably in the 10th century and the administrative regions from this time are called vármegye in Hungarian or comitatul in Romanian (from Latin comitatus). Various dates for the first documentation of the names for this region (1150, 1237, 1271, 1324) are given in Romanian and Hungarian texts (without any references!). Sometime between 1203 and 1214 the county of Zarand was separated from the county of Bihor, and the citadel of Zărand was founded after 1232. The region continued as an administrative region with the county town of Zarand and then the …read more

The river Lopatna is one of the main tributaries of the Cricovul Sărat river which leads to a depression in the hills east of Teleajen between Matița to Cărbunești. These villages were out of the way of the Transylvanian trade routes, but had a salt mining industry. More than half of the villages are documented during the 15th to 17th centuries by the various rulers of Țara Româneasca, and were free villages, handed down from their elders. However, royal possession through sale of confiscation or ownership by the monasteries led to the villagers paying their dues. From the 18th century …read more