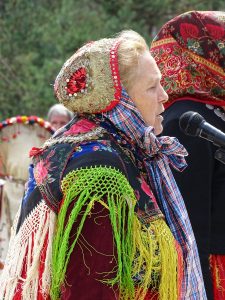 During the times of the Ottoman occupation, in the 17th to 18th centuries, there were a number of relocations of Bulgarians (both Catholic and Orthodox) to regions north of the Danube. Some relocated further west into the then Hapsburg Banat region, and some subsequently relocated again to modern Bulgaria.

During the following centuries the Bulgarians living in a few villages in Romanian and Serbian Banat have maintained their Bulgarian identity whilst those that returned to northern Bulgaria took with them elements of their specific Banat-Bulgarian identity in their costumes, customs, music and dance. 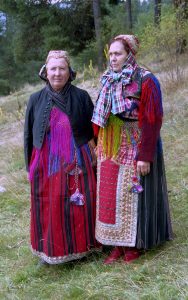 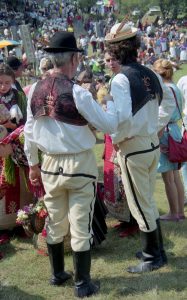 The area around Chiprovtsi (Chiprovtsi and the villages of Kopilovtsi, Zhelezna, Klisura and Kutlovitsa [1]) has been an ore mining region since antiquity. In the early 14th century Saxon miners arrived in the town and were granted special privileges. The miners adopted the Bulgarian language, but continued their Catholic religion. The town and some surrounding villages became a centre for trade with connections into the wider trading networks of the west Balkans and a centre for the Catholic faith (see also the local Chiprovtsi museum).[2]

Following problems with their privileges during Ottoman times there was an unsuccessful uprising in 1688 against the Ottoman rulers. After the destruction of their town some 2000 Catholics moved across the Danube into southern Romania. They initially settled in Oltenia around the cities of Craiova, Râmnicu Vâlcea and Brădiceni with their rights endorsed by Constantin Brâncoveanu the Prince of Wallachia.[2] 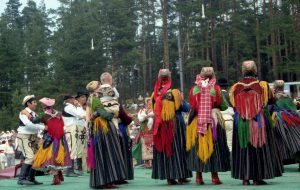 From 1690 some moved to south-western Transylvania (Vințu de Jos and Deva[2]) receiving privileges such as civil rights and tax exemption from the Habsburg authorities. Vințu de Jos was a prominent town based on the salt trade dating back to before medieval times. The town and surroundings have a long history of multi-ethnic and multi-religious composition as various changes in ownership and waves of people arrived. In 1711 the Bulgarians formed a Bulgarian community and in 1726 a Franciscan monastery was built in Vințu de Jos. Subsequently many of the around 500 families of Bulgarians moved on to Sibiu, Deva and Banat (predominantly the village of Vinga) that was resettled by around 125 families of Bulgarians originating from Chiprovitsi in 1741.[3] A Franciscan monastery was also built in Vinga that is currently the mayor’s office. 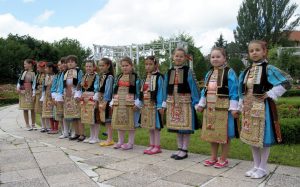 There were a number of Paulician villages (a Christian sect dating from the 7th century) in Bulgaria at the time of the start of the rule of the Ottoman Empire in 15th century. Some locations converted to Catholicism in the early 17th century, some people later converted to the Muslim faith.

Nicola Stanislavich, based at Craiova and the Catholic bishop of Nikopol, organised the passage of Catholics (around 300 families) between 1726 and 1730 from locations in northern Bulgaria to Oltenia (which was at that time under Habsburg rule), until the Ottoman rule blocked further passage.[4] In Ramnic (Râmnicu Vâlcea) these Bulgarian “Paulician” arrivals built a new church, but following the Hapsburgs withdrawal from Oltenia in 1737 this was destroyed by an Ottoman invasion in 1738. Subsequently in 1741 a number of Bulgarian “Paulician” moved westwards from Râmnicu Vâlcea into villages on the Banat Plain within the Habsburg Empire including Stár Bišnov (Dudeştii Vechi) in 1738 and Theresiopolis (Vinga).[5] 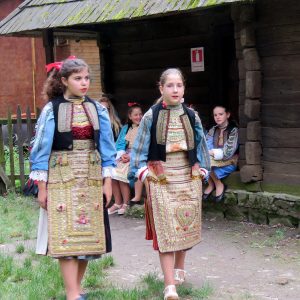 In the 19th century some of these Bulgarians also moved into other villages and towns in the Banat region and south of the Danube into Vojvodina.

The village of Cioplea (near Bucharest) was founded in 1812 under Russian protection and the bishop of Nikopol arranged for Bulgarian “Paulician” from northern Bulgaria to move there during the Russian-Ottoman war.[6] In 1828, also during the Russian-Ottoman war, he negotiated in Bucharest for about 20 to 30 Catholic families from Beleni, Orash, and Tranchovitsa in northern Bulgaria to cross the Danube who founded the commune of Popesti Leordeni (near Bucharest).[7]

After Bulgaria was liberated from the Turks in 1878 many of the Bulgarians living in the Banat region decided to return to north Bulgaria. They settled in the area around Pleven and Vratsa.