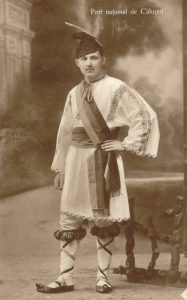 Călușeri, as a group men’s dance for special occasions, was practiced by Romanians in villages in Transylvania in the 19th century, and we can only presume this practice goes further back in history.

The development of Călușeri dancing took a parallel path from 1850 which led to a “national” identity portrayed through dance performances. This may well have re-enthused local variants of the old Călușeri in villages where the practice was declining or in the latent repertoire.

This page is only to give a hint of Călușeri as a national symbol and popular performance in the late 19th century and early 20th century through newspaper and journal reports.

The choreographed dance for the ballroom 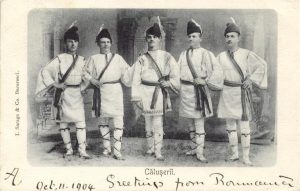 In 1851 Transylvanian intellectuals, Iacob Mureșianu (composer) and Ștefan Emilian (professor), from Brașov presented a choreography of the Călușeri dance, Romana [2]. During the late 19th century Romana and Bătuta were performed in the ballrooms of the city elite as a performance item either within the programme, or before social dancing commenced. This was very often as a sign of Romanian national identity, that became a virtuoso dance in the spiritual life of Romanians [1].

Romana was a Romanian national dance added to the ballroom salon dances which typically included polka, waltz and the French quadrille [2]. By the early 20th century, some 50 years after being choreographed, the enthusiasm for Romana had faded [3].

References including the word Călușeri in journals (revista) date from the 1880s. The dance names are always Călușerul and Bătuta, the original name of Romana for the dance created by Iacob Mureșianu being replaced by Călușerul by 1866 to the dislike of Emilan Ștefan. 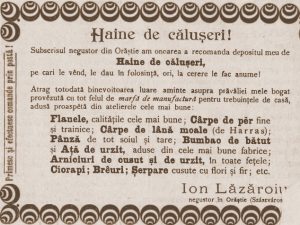 The earliest reference we have found is in a church paper dated 1883 published in Arad regarding a concert of mainly classical works on 10 November 1882, but at the very end of the programme Călușeri are listed on the programme [4]. An event in the comuna of Seliște (on the way to Sibiu) in 1898 included five youths dancing Călușerul and Bătuta. The list of dancers gives their professions as local trade’s people [5]. In 1895, the Saint Vasile (New Year ’s Eve) celebrations in Caransebeș included students dressed in Romanian costume who danced Călușerul and Bătuta [6]. In 1899 two Banat villages (un-named) are mentioned with troupes of youth Călușeri connected to the local church [5]. 1904 in Brașov-Șcheiu, ten Călușeri dance “our beautiful national dances Călușerul and Bătuta” followed by hora mare [7]. In 1900 during a popular festival in the village of Șoimuș, Bistrița region, the formal concert was followed by popular dances of the salon and Călușeri dancers from the village of Ragla [10].

From 1897 the clothing shop in Orăștie was advertising for sale, “Haine de Călușeri” [5]and in Brașov in 1910 a leather seller advertised opinci for Călușeri [8].

Hunedoara region is still the region with the most older style village Călușeri teams, but their performances were not limited to the traditional winter custom complex, there is evidence that they also often provided performances at local events.

The 1897 Rusali celebrations in Orăștie on Monday after the church service included Călușeri dancers dancing Călușerul and Bătuta during the Nedeia (traditional saint’s day fair)  [9]. The 1898 Rusali celebrations in Hațeg included Călușeri after the formal programme [5]. In Orăștie, the 1903 Christmas party at a hotel included the Călușeri dancing with sticks and without sticks, in national costume with scarves, followed at midnight by Hățegana. Also at New Year the ball of the Călușeri took place in a different hotel [8]. 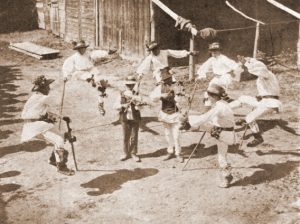 In 1903 in Orăștie, a concert for national reunification during the two days of Easter, included 11 or 12 Călușeri, dancing during the intermission,in the same way as in Brașov, who presented the national dances bătuta, brâul alunel and Călușerul, wearing scarves and national belts (tri-colour) [8]. This concert is interesting as they mention “as the way in Brașov” which must be referring to the created salon dances, the inclusion of brâul alunel as a national dance, and the national statement of the “tri-colour” belt representing the Romanian flag. 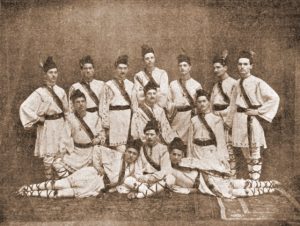 The 1899 exhibition of shoes in Bucharest included a performance of Călușeri by the Junii (traditional youth group) from Brașov [12]. In 1909 a group of Romanian solders danced Călușeri in Bosnia (near Knin in Croatia now) during the anniversary celebrations of the 1866 war with the Turks [11]. In 1910 the New Year party for the Romanian community in Vienna included Călușeri dance by the youth from the university [11].

The national symbol of the Călușeri and the tri-colour belt became part of the struggle by the Romanians against the Hungarian regime after Transylvania became incorporated into the Hungarian state.

In 1904 the two days of Easter celebrations included eight Călușeri from Batiz (Hunedoara), but there was conflict about wearing the tricolour belt on a costume with narrow closed sleeves that was deemed to be Hungarian and not the Călușeri costume [8]. In SânMiclăuşul Mare (now Sânnicolau Mare in Banat) a fund raising event in 1904 for the local Romanian church ended up with fines and the priest imprisoned [5].

The Călușeri from Vaidei arrived in Orăștie on election day in 1905, but the police stopped them and they had to put their flag under wraps [8]. In 1911, in Arad county, wearing the tricolour led to nine men from the Zeldișiu (now Iacobini) Călușeri to be fined and imprisoned for two days [5].