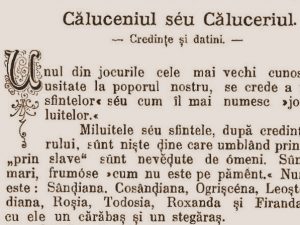 It seems probable there was some form of ritual healing căluș that took place at rusali in the Banat region before the popularity of the late 19th century national revival of călușeri. From the very limited information available it would appear that the Banat custom was not exactly identical to the Transylvanian or Oltenian custom. Viua discussed possible links to the southern Balkan Aroman traditions [1], although there is nothing substantive to support this, however such links are a common underling thread in the Banat hills region.

The earliest know reference of a Banat custom dated from 1832 [2], and was written by Bojincă who came from Gârliște in the Caraș valley and attended school in Oravița. He describes a traditional ritual căluș, where a group of men led by a vătaf, walk through local villages at rusali time. His comments and descriptions in the book are from personal observations, so we might assume he is discussing traditions in his local Banat, but as Neagota points out he does not supply any concrete locational data [3].

The most quoted reference for căluș in Banat is a description by Sofronie Luiba [4] dated 1898, which does not explicitly list the location for his description. He came from Maidan (now called Bradișor, just north of Oravița), where he was the local the local teacher, and according to newspaper reports was active in promoting cultural activities in his village. There is an earlier, and more clearly written, description written by the priest in Maidan, Aureliu Iana (brother-in-law to Luiba), that confirms the locations as Maidan (Brădișor) and Gădiș (Agadici) [5].

Luiba and Iana use a local name of căluceniul, which is otherwise not documented, although in Grebanaț (west of Oravita, now in Serbia) the revival styled călușeri that takes place on the day of the local carnival, and incorporates an older house-to-house tradition, use the name călucerii thus either intentionally or to demonstrate continuation linking the national revival călușeri with an older local tradition.

1. After the oath the cărăbuși play the marșul sfintelor (march of the saints), the vătav leads in front, followed by the six căluceni, then the ceiuş and last the bloj.

2. Ciocana or ciocanul is danced in a circle around the sick person and includes beating sounds made by the heels. Iana says this dance resembles the 3rd figure in the modern Călușerul.

3. Zbătută (stamping) is danced in a circle, walking high on the toes with beating sounds made by the heels.

4. Sărita (the jumping) is danced in a circle one behind another, with the căluceni beating their heels on the ground. The figures resemble the figures from bătută of the current călușeri.

5. Ursul (the bear) is danced by the voivode with a woman, especially a sick woman, who wants to dance under the sword. The bloj (mute) takes the vătav on his back to the audience, where the vătav tries to sell the hideous mute but fails to do so.

6. Ciora (the crow) is the dance of the ceiuș who jumps like a crow.

7. As the sun sets the cărăbașii play jocul soarelui (dance of the sun), while all the dancers pass under the sword and hammer.

From Iana we learn about the characters in the căluceni custom, the dances and the sequence of actions [5]. Căluceniul, required eleven people; six călușeri, two cărăbuși (bagpipers), one voevod (prince) or vătav (priest/leader), one ceiuş (from Turkish for the lower rank messenger) and one bloj (mute). They take an oath that they will keep the law of the saints restrain themselves from the worldly things, not look women in the face, and they will dance tirelessly.

The călușeri all have spurs on their heels and dance to the sound of the spurs. The vătav is the commander, he carries a sword and pistols at his waist. The ceiuș has a stick whose head is a hammer (negiac) and has the plants such as dwarf elder (boz which is an old medicinal plant) and garlic in his belt. The bloj has a white goat skin coat and carries a whip. The cărăbuși are the musicians (bagpipers). Mostly in Romania the bagpipe is called cimpoi or a derivative from this. The long pipe is called the bâzoi and the shorter pipe with the finger holes (chanter) is called the caraba (also karaba in Serbian and Croatian). In southern Banat the name of the chanter is use for the whole bagpipe cărabă [6].

Luiba says that the călucenil danced 12 dances with 21 figures, of which three dances were also for women. Collating the information provided by Iana [5] we can generate the list of dances (shown in the box opposite).

There are also descriptions of the ritual custom which resemble the căluș in Oltenia, including: the voivode makes the cross behind the sick man once with the sword, then repeats this and passes his right foot over him. In the evening, when they go to bed, the bloj beats each one with the hammer on the soles of their feet three times.

The only other historic references to a ritual type of căluș in Banat are recorded in Ciclova Română and Borlova. Hedeșan [6] said that in Ciclova Română at rusali the căluș sometimes had a rabbit skin in which wormwood, garlic and some others items were put, then it was sewn up and hung at the top of a stick that was carried by the most respected călușer [7].

At Borlova, in the mountain region, a musician was documented as saying that the ritual căluș between 1935-1942 at rusali included one or more mutes and a flag with medicinal plants [7].

Both appear to have similarities to the ritual in Oltenia, but neither are exact in details. The musician in Borlova could be recalling a memory from elsewhere, and a căluș team in Ciclova-Româna could be an Oltenian team from neighbouring Ciclova-Montâna where Bufeni from Oltenian had immigrated.

The Romanians from Foenu […] have the tradition that the second, the third of Easter, and other festivals are danced on the road. This public dance, it is known as the big dance (jocul mare).

After lunch, the lads and men on the one hand, the girls and wives on the other hand, began to gather near the place of the dance, and waited intently for the pene (“feathers”) leader to signal that the dance should begin. The musicians then go to the dance space playing music – the dancers follow them, it is the girls who meet everyone in the dance space.

Once the dancers were chosen, and made a big circle, then the musicians remained in the middle. The dance begins and the musicians go around the circle, and those who were close the music began to jump and spin as much as possible […]. Those who know how to dance well and make more figures in the dance are called caluseri.

The music was for violins (lăute), cello (lauta mare) and drum (duba).

It is assumed from early potential references for Transylvanian călușeri that there was a performance aspect prior to the 1851 revival (not just a ritual at a particular custom date) . In Banat, there are two interesting documents about performance călușeri. The first is from Sofronie Luiba who discusses a written document found in his grandfather’s library.

On the occasion of a party arranged by the officers of our Austrian army and other church leaders in Italy, eleven soldiers, Romanian Transylvanians, dressed in căluceri clothes, danced the căluceri [8].

In the book “Topografia Maiden” [9] we understand that Sofronie’s grandfather was Jurgiu Liuba Marcu, and that his father Miuță Liuba Marcu (who died in 1872) had two uncles that were forced to serve in the Austrian military and fight against Napoleon in France (around 1785). From a list of those serving in 1785 we can see the names of George Liuba and Trăilă Liubia. This tells us that they recognised the Transylvanian călușeri as căluceri and not as an unrelated custom.

The second is an 1859 report of the two days of Easter celebrations at Foeni, a village in the Banat plain area, at that time four hours travel from Timișoara. Foeni has a Romanian majority with a Serbian minority and is separated by history and geography from the other locations referenced which are in the Caraș valley.

The anonymous author confirms the good dancers are called călușeri, but prior to this mentions pene (feathers) which probably refers to the long feathers on the men’s hats, and says there is a leader of the pene who indicates that the event can start. The călușeri dancing at the start of village saint’s days (Nedeea, Ruga) and Easter celebrations was typical in Banat later in the 19th century. It seems unlikely that the national revival călușeri of Iacob Mureșianu first performed in Brașov in 1851 would have been performed in a small Banat village some 20 to 30 years before the wider popularity of this choreographed Salon dance. More probable is that there was already a non-ritual călușeri, possibly related to the connections to Transylvania via immigration from some century earlier.