The folklore group is based at the village culture house. The dance themes are similar to both Harlets and Zlatia in terms of the dance circling to the right and followed by a dancing in a line, and the use of the sticks held high and pointing forwards. These themes are consistent with elements in the Căluș from Dolj regon north of the Danube. 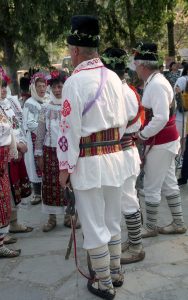 The men performed at National Festival of Bulgarian Folklore in Koprivshtitsa in 1995 and 2000.

There is a long history of exchange between either side of the Danube. Village interviews say that in 1821 a group of fugitives, who possibly left in the 18th century, returned and settled around the existing village of Hartlets. Some of the villages they returned from are known Căluș villages in Dolj. Later, 36 families left Harlets after the Russo-Turkish War of 1828/29 finding refuge in Romania. The house-to-house tradition stopped after 1946. The village dance group continued performing the custom without choreography or change. They presented at the National Festival of Bulgarian Folklore in Koprivshtitsa in 1995, 2000, 2010, and 2015.

Up until the end of the 1930s, some of the villagers used to go to the neighbouring town and perform the Kalushari for money. Yet in the village of Zlatia itself there have been no Kalushari since the middle of the 1920s.

The custom of Kalush existed in the village from at least the 1870s and continued until around 1945-6. After the Second World War there was a  small folklore dance group of Kalushari that performed during the 1950s. From 1964 to 1994 an amateur Kalushari dance group based at the village culture house was guided by memories of an informer from the old Kalushari team. This team performed at the National Festival of Folklore in Koprivshtitsa in 1966 and 1981, then disintegrated in 1994. A new Kalushari team first performed on June 29, 2010 at the village fair and in 2014 at the Caracal Căluș festival in Romania [1]. 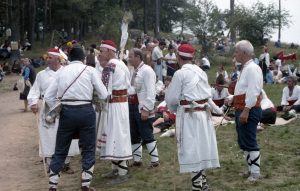 The team last performed at the National Festival of Bulgarian Folklore in Koprivshitsa in 1986. The small clip of video suggests a dance in pairs, very similar to the current tradition from Gurgița in Romania and that in Cherkovitsa in Bulgaria.

Many years ago I found Ovcha mogila on a list of places in Bulgaria with a Căluș tradition, at the time I could find no evidence and the location looked unlikely, but to my surprise I found I had recorded a performance at the Koprivshtitsa festival in 2000. The performance includes many of the features typical of a Căluș but also much that appears to be choreographed. We see synchrony of gestures as part of the choreography, a section with four dancers around the “sick” person clashing sticks above, while the remaining dancers beat a constant rhythm on the ground with their sticks. None of these choreographically attractive features are in any traditional forms.

There are films of this group in the village of Cherkovitsa including at a local festival with dates of 2008 and 2014. Iliev says the team did not dance between 1980 and 1990, only meeting for special events and festivals [1]. Comparatively the dance looks most similar to Giurgița in Dolj, Romania and to the little we know about Debrovo.