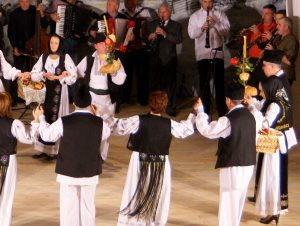 Hora is danced at community occasions in the three ethnographic zones of Banat – the Banat plain, Banat hills and mountains[1]. In southern Banat the older dance cycle is typically Brâul followed by either, or both, Hora and Sârba. On the Timiș plain the dance cycles are loosely constructed of Sorocul, întroarsa, Pre loc (De doi), and Hora [2]. The generic Hora from Banat, that is most commonly practiced at events, is documented by Ionel Marcu as Hora bănățeană [1].

Banat Hora danced at the start of the wedding celebrations

In Banat Hora has a few common features that are less common in the rest of Romania:

There is also a close connection between the structurally similar Brâul bătrân and Hora in their function at community events and life cycle events such as weddings and funerals [2].

Hora starting the evening dancing for a village Ruga

The typical Hora in Banat has two stable structural parts to its construction. Hora mare is nowadays quite consistent throughout the region, but from past notations we can see some diversity in localised variations.

The rhythmical pattern of the steps – slow, slow, quick-quick, slow – is repeated with the opposite feet making an 8 measure sequence, or in Leibman terminology 1101.1101 [6].

Using the Leibman method of considering “weight changes” and notating this parity as “1” or “0” per measure of music easily allows the pattern connections between dances with variations in rhythmic construction in many forms of Balkan chain dances.

There is a basic concept in the floor plan for the direction of the line in local chain dances. The concept tends to be adhered to independent of the specific local dance, however the detail varies a little between sub-zones, but creates a common feature for many dances (Brâul in the Banat mountains and the Danube Gorge, local forms of Hora – Hora mare, Hora mica, Axionul, and Četvorka (Hora la patru) in northeastern Serbia – and the local version of the Serbian dance Žikino kolo [6].

Ionel Marcu commented on this regarding the mountain region (Mehadia, Domasnea), where the basic steps are to the right, then two steps backwards, finally moving to the left with very small steps [1]. However, variations on this pattern are typical over a wider area from Pădureni (Hunedoara) to northeast Serbia.

Most Romanian dance notation is presented in textual description or one of the local methods of pictographic notation, and rarely in the international Laban system. This discussion focuses on the parameters of interest for readers without knowledge of these notation systems. 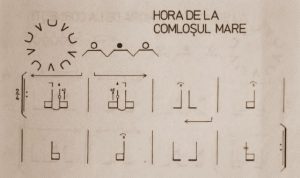 Hora is danced in a circle formation, with the dancers holding their joined arms down low, progressing to the right [8].
The Hora from Comloș is characterised by slow steps (in values of minim) with body sways to the right and left, as it is also from Cornești where Hora is the first dance in the dance cycle [8].

In parts of the Banat plain (Sânnicolau, Comloș, Sânmihai, Jebel) there were variants of Hora in which the basic steps was done by the girls but the men made variations with heel clicks [1].

In some locations there is a specific version of Hora danced to particular melodies that is known as Axionul. This follows the introductory Hora [9] or is a dance for men [10]. 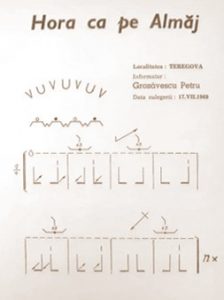 In the Almăj valley, beside the typical Hora ca pe Almaj with its general characteristic of spacious and gentle movements, there is Hora dunărică that has more enriched movements [11].

Hora ca pe Almăj has a second figure that uses subdivision of the first step into 3 short steps. Hora dunărica is unusual as it only progresses to the right, there are no steps backwards or to the left. In this case the notated figure A is the subdivision of the figure B [11].

Hora ca pe Almăj as recorded in the upper Timiș valley (Lațcu and Munteanu, 1971:39) has a typical replacement of the initial two measures as a two step-touch in place. A variation that is also part of the recreational dance version of Axionul.

Dancing in “contra-timp” is typical in the Bistrei and upper Timiș valleys. This is where the steps are delayed a beat with respect to the music. Hora bănățeană from Glimboca is documented in contra-timp [12].

Hora as a combination of chain dance and couple dance

There are dances referred to as Hora that are a line dance followed by a second part where the dancers break from the circle formation and form couples. Examples are Hora “Frunza bradului” in the Almăj valley [11] and Hora de la Teregova in the upper Timiș valley [12].

The basic Romanian 4 measure hora (three steps forward towards the centre and three steps backwards) is described as Hora lui Birca in the hills (Deal) region, with a variation noted in the villages of Silagiu and Bocșa [8].