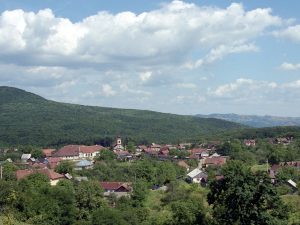 Bufeni is a nickname used for a group of Oltenians that moved to the Banat mountain region in the 18th century to work for the mining industry that was reinvigorated by the Austrians following their acquisition of the Banat region from the Ottoman empire.

Before this, during the 17th century, some 13,000 migrants came from Oltenia to work as woodcutters, charcoal burners and coal miners. By 1690 there were some 28 households of Oltenians living in the village of Sasca Română [1]. This period was a turbulent time with changes of authority between Ottoman, Austrian and Transylvanian rulers for much of the Banat mountain region.

In the 18th century some 15,000 families [1] joined the colonisation of the plain of Banat as agricultural workers [2] moving into the villages of: Bucovăț in 1723; the locality of Comloșu Mare which was founded in 1734 with families from the area of Craiova, Slatina and Polovracilor; from 1739 there were groups of both Muntenians and Oltenians in the village of Boldur (Nicolae Iorga [1]); and also in Satul Nou, Sân-Mihai [3] and Straja [4] villages which are now situated on the Serbian side of the border after the 1920 division of Banat.

The mountain areas of Banat have had mining for copper, silver and gold since ancient times plus supplies of coal and forest wood. Following the acquisition of Banat from the Ottoman Empire in 1716 the Austrian administration reinvigorated the ancient mining operations using workers from Oltenia. Additionally for just two decades (1718-1738) the mining at Majdanpek was also worked under Austrian rule by miners originating from Oltenia [5].

The origin of the name Bufeni is uncertain (Dex online), but some suggestion are:

There was a clear distinction in terms, the older Romanian communities (such as Ciclova-Română) referred to themselves as frătuți (brothers) and to the new immigrants as bufeni such as at Ciclova Montană [7] or at Sasca Montană [6], or as bribeți[2] coming from the many sparrows that live around houses and were always hungry (Tăutu, 2010). The Bufeni called themselves țereni [1] which probably refers to peasants (tărani) but also refers to the country they have left, Țara Româneasca.

In 1849 miners referring to themselves as Bufeni from Moldova Nouă moved south and restarted the mining at Majdanpek which was by then part of Serbia [5].

For a period Oltenian dress, language and customs continued [4] [6], but a century later there is little to be seen differentiating old Bufeni villages and the Banat villages in terms of local dance and music.

The origin of the migrants can only be assumed from the family names that reflect place names in Oltenia, each reference gives slightly different lists, which have some ambiguities where there are several places with the same name in Oltenia.