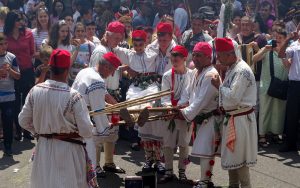 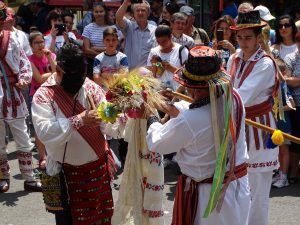 The Căluș ritual takes place during the period of Rusalii (Pentecost) which occurs fifty days after Orthodox Easter, and lasts for seven to nine days. This transitional period from spring to summer is when, according to Romanian and Slav folklore, malevolent fairies, known as iele are at their most active. During Rusalii the villagers were subject to certain work interdictions. They must not clean their houses, work in the fields, or with animals. If they broke these interdictions they could become possessed by the iele which resulted in a mysterious form of nervous illness which could only be cured by being ‘danced’ by the Călușari (dancers), the main ritual actors of the Căluș tradition. 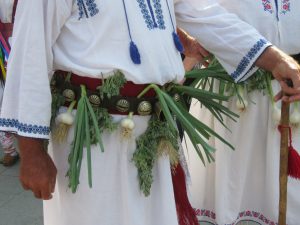 The period of Rusalii was a liminal period in villagers lives [1] as during this time normal relationships within the village were suspended. The traditional Căluș ritual had three distinct stages which equate to those in Turner’s extension [2] of Van Gennep’s Rites of Passage. The Căluș tradition commenced on the evening of Rusalii with the taking of the ritual oath, which formed the stage of separation or pre-liminal period. For the period of Rusalii itself the Călușari danced in the village, performed ritual dramas and carried out ritual healings (the transition or liminal period). The final, post liminal stage, was the unbinding of Căluș which formed the reintegration of the Călușari into their previous roles within the village.

The leader (vătaf) of the Călușari had special powers. Once appointed, he kept his role throughout life. During Rusalii the Călușari were bound by a set of ritual laws, which included obedience to the vătaf, they must never be alone, and must have no contact with women (if they broke this they lost the ability to dance). They had to wear garlic and wormwood in their belts to fortifying their powers and protect them from ‘spiritual’ harm. 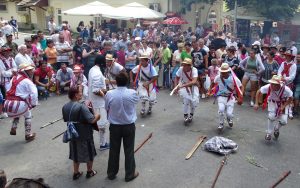 The secret oath (jurământ) was taken on the eve of Rusalii, at sunset (a liminal time between day and night), at a liminal place; a crossroads or mound, on the edge of the village. Once the oath had been sworn the group were bound together for the period of Rusalii, and the Călușari were bound to dance the Căluș for nine years. The flag (steag) was raised. This was made of a wooden pole, with a white cloth tied to its top. The cloth contained a bunch of green garlic and wormwood. These were vital elements in the ritual as they were considered to have magical curative powers. This ceremony represented the ‘Rite of Passage’ setting the Călușari apart. During Rusalii their normal social relationships within the village were suspended, and they took on a supranormal existence, thus coming under the iele’s possession, being ‘betwixt and between’ [1]. This gave them the power to mediate between the spiritual world and the real world and to cure anyone inflicted with iele sickness. A complex spiritual relationship existed between these fairies and the Călușari built on oppositions (see Table). 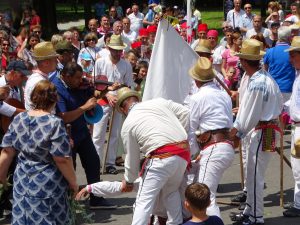 During the days of Rusalii the Călușari went from house to house performing a suite of Căluș dances in each courtyard (liminal places between street and house). In south Muntenia dramatic plays similar to mummers plays were also performed. Parents also invited the Călușari to dance with their children in their arms as this was considered to bring good luck and good health. The performance finished with the onlookers joining with the Călușeri to dance Hora Călușului. In South West Oltenia and northern Bulgaria ritual healing (Vindecarea) took place when necessary. This commenced with the diagnosis by the vătaf, who had to be certain that this illness had been caused by the iele, hence could be cured using the powers of the Călușari. This was done by playing the tunes for the Căluș dances to see if the sick person reacted. If he did, then the cure could take place. The ritual cure was performed by the Călușari danced round and over the patient, in silence. Once the healing was successful the patient was lifted up by two Călușari. In some cases a ritual enactment of death and resurrection took place. One of the călușari would fall to the ground in a trance (doborâre), at the exact moment of the healing, symbolically taking on the illness. 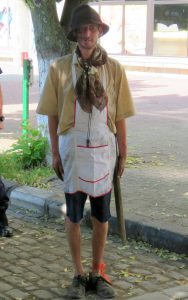 In Muntenia the Călușari are accompanied by a transvestite figure called the Mut (mute). This character plays a comic role. He wears an ugly mask, dresses in a mixture of men’s and women’s clothes and carries a red wooden phallus, which he used to revive ‘dead’ Călușari. He is not allowed to speak during the period of Rusalii, but communicates via comic mime, humorously poking fun at any Călușari who dares to make a mistake in his dancing. His role as of ‘anti-vătaf’ plays out symbolic reversals of accepted norms of behaviour, and contains a complex interchanging of identities.

On the final day of Rusalii the flag was ceremonially taken down and buried ready for the next year at the place where the oath had been taken. This ceremony was a reversal of the initiation ceremony and signalled that the Călușari were released from their oath. At the end of the ceremony the Călușari ran away without looking back. They re-entered the village and greeted each other as if they had not met for a long time.

Extracts from the essay: “Mellish, Liz (2006). The Romanian Căluș tradition and its changing symbolism as it travels from the village to the global platform“