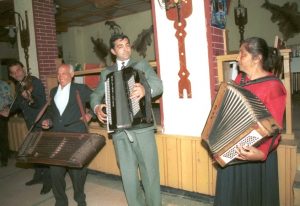 A formation of musicians playing popular music is known as a taraf, with professional musicians known as lăutari. Such groups have been playing for dancing in Romania for at least some hundreds of years. 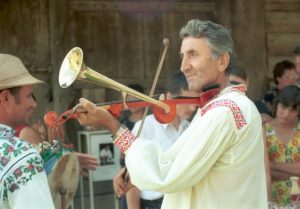 The modern violin arrived in Romania in the 18th century and is known by a variety of names; cetera – Transylvania, scripcar – Moldavia, lăuta – Banat and Hunedoara. The earlier forerunners of the violin such as the rebec, Slavic gusle or eastern kemene are found in all Romania’s neighbours, but not in the existing traditional music of Romania. 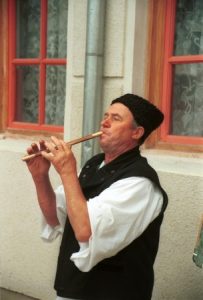 Six hole pipes caller fluier are the most widespread traditional instruments in Romania and were used in the past for dance music. Many of these designs of pipe are common throughout the Balkans, with Romania having the greatest variety. Instruments are made by the players and artisans. 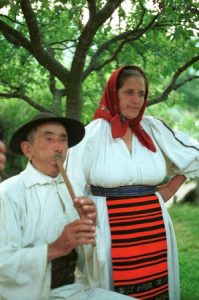 The fluier pipe is still common and was the main instrument for dance music in Romania, with rhythmical accompaniment later added by a cobza. Although the bagpipe was popular from medieval times, as it was in most European countries, it became rare in recent times until revived during the 20th century for organised folklore performance. The violin has influenced the music in all regions of Romania and became the principal melody instrument since its introduction. However more recently the music played in the social dance context is dominated by saxophone and keyboard. 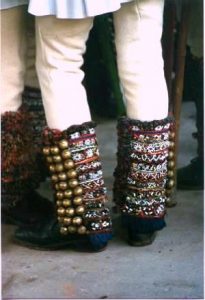 The oldest type of footwear is peasant sandals (opinci) worn with woollen or felt foot wraps (obiele) or woollen socks (caltuni). Boots were introduced during Ottoman times, and were worn first by the upper classes, only becoming available to the richer peasants in the 19th century. Men’s calf length boots (cizme) were made of black leather. Women in Sibiu, Mediaș and Făgăraș wear a ankle height laced black boots called gheată (pl. ghete). 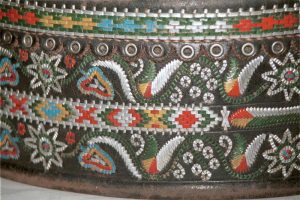 Broad leather belts are worn by men throughout Transylvania including Maramureș, in most of Moldavia, and along the southern side of the Carpathians. These are made from folded leather and differ in width and decoration from zone to zone.  The most widespread decoration technique involves stamping the leather from the underside to make decorative patterns (called repoussé work which means “raised in relief”) and decorating with eyelets, or decorating with narrow stripes of thin coloured leather called meșină. 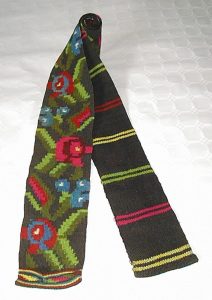 There are two main types of woven belts called brâu and bete. The former are wider and are worn by men and women and bete are narrow and worn mainly by women. Decoration of stripes, woven geometric and floral patterns (alesături) are now common in certain regions. In some regions the warp threads are cut to make fringes on the ends and also tassels or pom-poms are made using the end threads, also white beads (mărgele) can be woven into the edges of the warp threads. 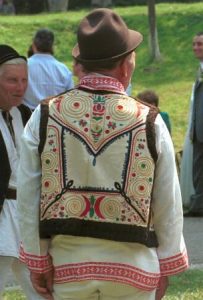 Long fabric costs called mintean are worn in Gorj, and Mehedinți. White felted woollen cloth waistcoats a waistcoat are called ilic and is decorated with black braid in patterns derived from the uniforms of the Hapsburg army in the Oltenia, Banat, Arad and Hunedoara regions. Dark cloth waistcoats called giubea are worn by men in Dobrogea, and southern Muntenia.  In northern Muntenia, Transylvania men’s waistcoats (laibăr) made of plain black felted wool (postav). In southern Transylvania and north Muntenia black velvet ilice have replaced sheepskin waistcoats for women’s festive wear. 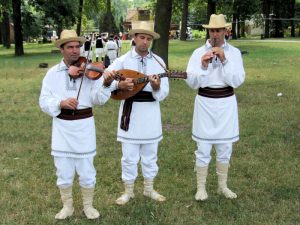 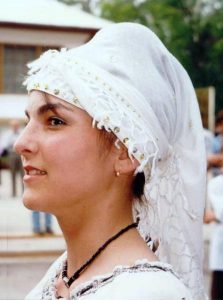 The main type of head covering worn by women was an oblong cotton scarf (ștergar) or silk veil (maramă), a square headscarf (basma), large square scarf (broboadă), triangular headscarf (testemel), a bonnet (ceapsă), a straw hat (pălărie), or a combination of a scarf and a hat. 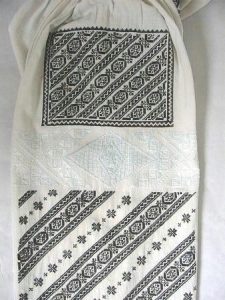 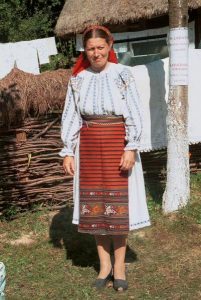 There are five basic apron types: 1) the straight apron (catrință or zadie), 2) a pleated or gathered front apron (șorț or șurt), 3) the wrap round skirt (fotă) which is a single straight piece of cloth wrapped round the waist and fastened at one side, 4) a pleated or gathered wrap round skirt (vâlnic or peșteman), 5) skirts (with joined seam) called androc or fustă. These garments are worn in many different combinations according to the local zone and the prevailing fashion. 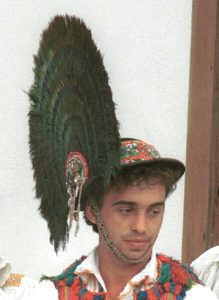 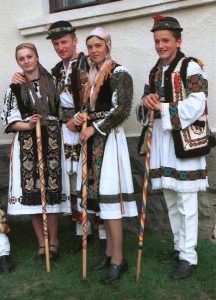 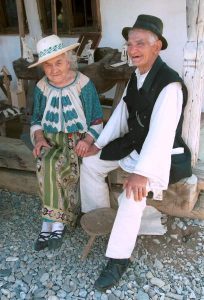 Costume has continued mainly in the sub-Carpathian regions from Gorj, through Vâlcea and Argeș to Dâmbovița counties. 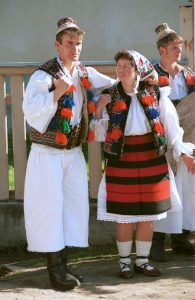 Traditional clothing in Oaș (Satu Mare county), Maramureș and Lăpuș (Maramureș county) ethnographic zones in the mountain region north of Transylvania at the border with the Ukraine. 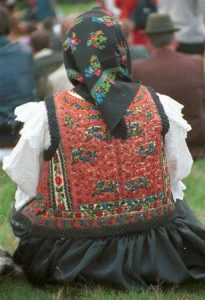 Cloaks (sarică or bitușca), coats (cojoc) and waistcoats (pieptar) made from sheepskin developed a regional identity both in cut and decoration. The extent of the decoration on sheepskin coats and jackets depends on the purpose of the garment. Cojoace and pieptare made for work wear generally have little decoration, whereas a cojoc or pieptar for festive wear is often completely covered with embroidery and appliqué.