The current region of ‘Banat’ is named after the ‘Banat of Temeswar’ (1718 to 1778) which became a Habsburg province following the acquisition of the Ottoman province of Eyâlet-i Temesvar (1552–1716)[1]. In 1552 the Turks occupied the former Hungarian region and transformed it into a Pashalik centred at Timișoara, which in 1568 was extended to include the mountain region bordering Țara Romaneasca.

Prior to the Ottoman conquest of 1552, and after the 1778 incorporation into the Habsburg ‘Kingdom of Hungary’, ‘Banat’ was not a defined administrative region.

After the First World War the short lived “Banat Republic” led to a Serbian invasion and subsequently in the Treaty of Versailles this area was divided into three, approximately along the boundaries of the majority population. This led to the plain zone around Timisoara and the Banat mountain zone being united within the state of Romania [2], the western zone became part of Vojvodina, Serbia, with only a small part in southern Hungary.
The title Ban was used in several Slavic states in central and south-eastern Europe between the 7th century and the 20th century. The source of this title is of uncertain origin but it was used for the lord or governor. The term Banat came to be used for frontier provinces particularly by Croatia and Hungary.

Although the ‘Banat of Temeswar’ included both the plain and mountain zones, the term ‘the Banat’ is confusingly used by some to refer only to the plain area of land (in the same way as “the Ukraine” or “the Steppe”). 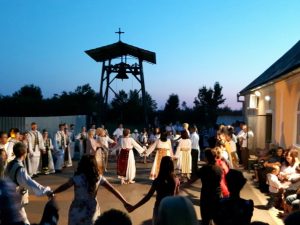 The historical definition of “Banat” does not represent a single ethnographic zone, however it does represent an ‘identity’ in current usage. Individuals describe themselves as either or both Bănățeni and Romanian according to the situational context [3]. Within Romania the identity of “Banat” is clearly understood, and the local song, music, and dance is popular and respected as a regional ‘identity’. 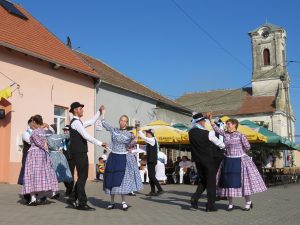 German dancers at a Saint’s Day celebration in Banat

Banatul de munte has a long history being a frontier border zone. In 1233 King Andrew II of Hungary established the “Banat of Severin” (Hungarian: “Banate of Szörény”), approximately covering the Banat mountains and western Oltenia, as a defensive zone[5], Severin being “northern” in Bulgarian referring the relative geographic position.

Prior to the Ottoman times this region alternated between Hungarian rule, Bulgarian rule (Second Bulgarian Empire) and Romanian rule (Țara Romaneasca).[6] It is recorded that this mountain region had a number of local Romanian Cnez rulers during the middle ages.

After 1778 when the Habsburg ‘Banat of Temeswar’ ended and most of Banat joined the Habsburg Empire, the Banat mountain zone continued as the Habsburg Banat Military Frontier until 1871. This border zone organisation, particularly the zadruga system of land possession by a number of families, together with tax exemptions and privileges, led to the stability of the region.[7]

Dealurile Banatului in the eastern part of Timiș county and the western part of Caraș-Severin county represents a predominantly Romanian ethnographic region with very little immigration into the villages during the Habsburg period.

Câmpia Banatului and immigration during the Habsburg Empire era 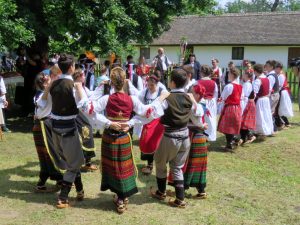 Serbian dancers at a festival

Câmpia Banatului is now split between Romania and Serbia and is populated by a mix of ethnicities. Prior to the Habsburg rule the population in the area was a mix of Bănățeni Romanians linked to Dealurile Banatului and Serbians connected to the Bačka Vojvodina region to the west.

The Banat plain was predominantly marshland that was drained by the Habsburgs in the late eighteenth century and settled in a planned colonisation by groups of Romanians, Serbians and Swabian Germans, Hungarians, Slovaks and Ruthenians.[8] The already existing villages, populations and subsequent relocation of populations were documented in the 18th century.

The majority of the immigrants were Germans, amounting to around fifteen percent of the total population.[9] This region came under direct control of Hungary from 1867 giving permission for immigration of Hungarians and so the Hungarian population increased to be around ten percent of the total population, predominantly located in the plain zone.[9] Despite population movements, forced and voluntary especially after the Second World War, this area has remained a multicultural, multi-ethnic and multi-religious region.[10]

From a Romanian “Banat” perspective the music and dance repertoire from the Plain includes “Banat” repertoire, plus Transylvanian elements brought in by the immigration of Romanians from Transylvania, with a more bourgeois style owing to immigration and status. 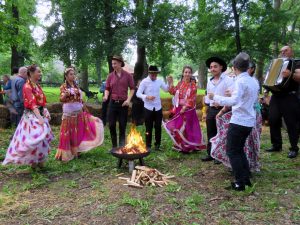 Rom dancers at the Ethnicities Festival in Timișoara

It is likely that Slavs settled in the area from the 6th century, which came under the Avar Empire through the 7th and 8th centuries, that was followed by the first Bulgarian Empire in the 9th and 10th centuries.

It is speculated (based on the Gesta Hungarorum) that in the 10th centuries the local ruler was Glad, probably vassal to the first Bulgarian Empire, who was supported by Cumans and Romanians, but he was defeated by the Hungarians during the 10th century. From two sources, the Gesta Hungarorum and the Legend of Saint Gerard, Ahtum was a duke of Banat in the 11th century who opposed the Hungarian Kingdom until he was defeated after which this area came under Stephen I of Hungary and was consolidated into the Hungarian Catholic kingdom.

The early Slavic history is preserved in the region’s toponyms. Very many Slavic based place names were recorded in the 14th century (whilst the region was under Hungarian rule) and continued through to post-Ottoman times suggesting continuous inhabitation, although there are only a very few locations with a recorded continuous Slavic population within the current Romanian Banat. After the Turkish victory at Kosovo (1389) and the Turkish occupation of Serbia (1459) many Serbs also emigrated to the Banat plain.