Valea Almăjului is a depression within the “Banat mountain” ethnographic region [1]. The village structure we see now predominantly dates from the Austrian times. Following the ceding of Banat from the Ottoman Empire to the Habsburg Empire in 1718, the local population was evasive to Habsburg control and subordination, and at times supportive of Turkish incursions. The Austrians created a militarised border zone where the organisation, particularly the zadruga system of land possession by a number of families, together with tax exemptions and privileges, led to the stability of the region. A century later they supported the Emperor and refused to participate in the Hungarian revolution, however from 1881 until 1920 it was under the Kingdom of Hungary [2]. 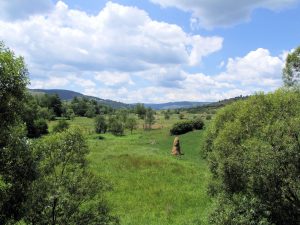 View across the Almăj valley

The region has a long history of habitation found in archaeological sites from prehistory, Dacia and Roman period. The name Almăj is most likely from old Slavic describing the hills [3]. There are few documentary references from the 13th and 14th centuries [4] when the region was predominantly under Hungarian rule following the capture of the Bulgarian fortress of Severin. These references are to Romanian nobles of the Almăj and Mehadia districts [3] and from the 13th century the mountain regions were part of the Hungarian border province “Banate of Severin” incorporating Romanian knez. Though the late 15th century there are references to eight villages (two remain with the same name) and the names of local estate nobles [4] and by the 16th century more of the current place names are recorded such as Mocerişul (1484), Putna (1500), Lăpuşnicul Mare (1540) [5]. 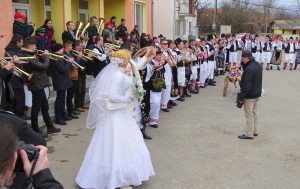 Slavic linguist Emil Petrovici noted during his fieldwork the old Slavic base to the place names in Valea Almăjului, and significant Slavic loan words and phonetics in the Romanian dialect, however no existence or memory of any Slavic population [5]. It seems the nobles and districts were Romanian by the 13th century. Although part of the Hungarian empire there are no Hungarian villages in Valea Almăjului, one informant commented that there was one village of Hungarian people, but the Hungarians left their village before the invasion of the Turks [5].

Within memory there has been further immigration of Romanians into the valley, but the continuing customs and culture appears to have more affinity with the mountain regions of Mehedinți and north-east Serbia (the “Vlach” Romanian speaking population) than to imports from other areas of Romanians.