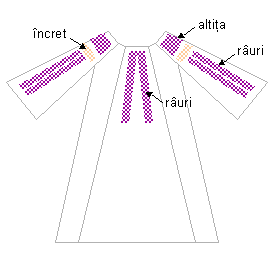 A rectangular strip is embroidered across the top of the shoulder (altiță). Since the end of the 19th century the structure of the blouse has changed so the altiță is not separate, so the sleeve is often cut from a single piece of cloth and the altiță became purely an element of decoration. The încreț (literally, “puckering”) is a band of 1-2 inches wide which separates the altiță from râuri. Its main function was originally to join 2 pieces of fabric of unequal width and it was initially gathered. . The râuri contains between 1 and 5 vertical (or occasionally diagonal) rows of embroidered motifs. These cover from below the încreț to the sleeve hem.