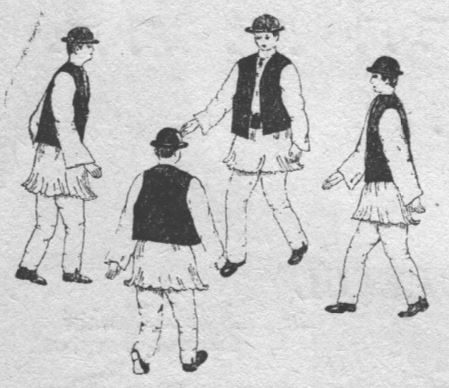 Around the Carpathians the men’s group dances that fall in the category known as Ceată distractivă (for fun) includes the dances Războiul (or Resteul) (Mărginimea Sibiului and Țara Oltului), Vulpea (Muscel) and Gătejul (upper Mureș). Bucșan inferred that the distribution of these dances is connected to the shepherds[1] however it should be noted that Gătejul [2] is not of the same choreographic form. This page is about Războiul from the southern Transylvanian region, but it should be noted that the title Războiul as a ‘fun’ dance is known in other parts of Romania as a subtype of Sârba.[1]

In the zone of Mărginimea Sibiului Războiul is a party dance preferred by shepherds. The name of the dance is related to the weaving machine (Război). In some variants the strigători (shouts) that accompany the dance satirise the lack of skill of the girls in this occupation and one of the figures where the dancers change places diagonally could represent weaving.[3]

The dance has a specific melodies and the dance figures are concordant with the musical phrases. The dance is for four people in a circle. In Sibiel village it is danced only by men[3] where as for Resteul in Dumbrăvița (Brașov) the dancers are usually two men and two women.[4]

There are two parts to the dance; firstly a resting figure with simple or jumped steps, and secondly a figure where pairs of dancers, each pair in turn, change places diagonally across the formation.[1] The sequence of figures may be fixed or variable by command.[3] At the command the dancers change their places, first the one who leads and his diagonal, then the other two change places, continuing alternately, and any errors causes amusement.[4]

In Mărginimea Sibiului eight variants of Războiul were collected in the villages, Jina, Sibiel, Gura Râului, Poplaca, and Rășinari where is it danced occasionally at weddings and parties with a fun and comic function.[1] In the Făgăraș zone, Războiul was collected in Porumbacul de Jos and in the zone of Perșani, and Resteul (in 3/8 meter) in Dumbrăvița.[4]

Războiul has also been included in the călușeri repertoire, in Sibiel [5], and a more distant variant in Rășinari, under the title Resteul, where the ceată is formed by two opposing columns of six people that cross over in the figure (this can also be seen by the călușeri in Poplaca).[1]

The universal concept is a resting figure followed by a figure were the dancers change places diagonally. There appear to be two choreographic forms: firstly, where the resting step is based on “123” (i.e. left-right-left or right-left-right) similar to the shepherds’ group men’s dances and the changing places is with “step-hop” or secondly where “hop-step” is used for both the resting step and changing places. The phrase might be concluded by stamps or jumps.