Drawn thread work (open-work) firele trase, is where weft threads are either cut or drawn out and stitches are made on the “drawn threads” of the warp. These were worked mainly in “white on white,” and were used both for women’s costume pieces and household textiles especially in Banat and Transylvania. This technique may have been taken from upper class fashion. There are two main types: 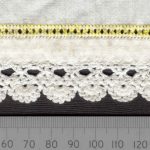 Șabac, is a type of decorative pattern made on the edges of the space created after drawing out threads on weaving, usually along the hem or a border. By the 20th century it was found throughout Romania in many variations, being one of the most common techniques used. It is always worked in long lines. The required number of horizontal threads are drawn out and the edges of the ‘space’ are neatened with tivul (hemstitch) worked over 2-4 vertical threads. Șabacul is then worked on these groups of threads passing the needle over and under the threads imitating weaving.​

Tăietură is a self- contained motive worked on drawn or cut threads in a fixed pattern, which is the central motive among other motifs. It differs from Șabac in that the threads are not drawn out from the length of the cloth but are only cut out from inside the motive. The stitches comprising the outside of the motive are worked first, then the spaces are cut out in the centre, then drug or feston is worked over the remaining threads in the centre of the motive, finally the cut edges are trimmed leaving a motive shaped like a network. Tăietură is found in Banat, northern and western Transylvania, and Hunedoara.